As Hinesh Patel explains, it will take some real magic to extricate western economies from the problems created by central banks waving their magic wands during the pandemic.

With price of practically everything having surged at a record pace over the last 18 months, the US Federal Reserve (Fed) chairman Jay Powell will need more than ‘eye of newt’ and ‘toe of frog’ to keep the mystical hold of ‘transitory’ inflation alive.

Perhaps most revealing, Mr Powell conceded that more persistent bottlenecks and energy-price increases had created an inflation framework for which the Fed’s ‘patient’ approach wasn’t designed.

Some covens, most notably at the Bank of England, have been quicker to internalise these realities and consequently revise their thinking and policy guidance. Although this certainly doesn’t excuse them from the possibility of making a policy error.

Labour markets have also been reading the runes. As the chart shows, ‘quit rates’ – namely the proportion of people in employment in a given industry or region who voluntarily leave their jobs – have risen to record highs in the US as more and more workers switch jobs to secure better deals elsewhere. 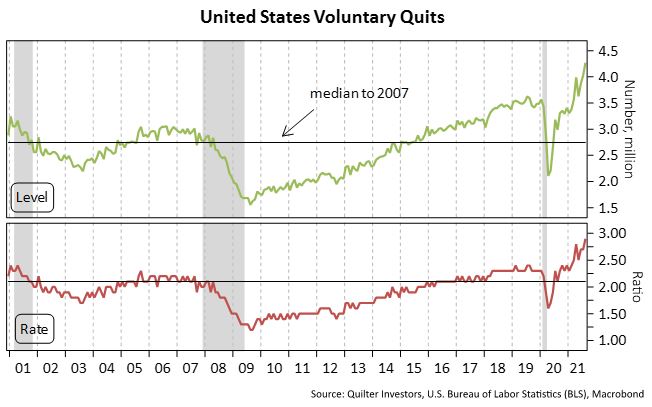 In turn, this has forced many companies to raise wages and salaries for their existing staff as they seek to strengthen labour retention.

In addition, in the UK for example, there will be a 6.6% increase in the National Living Wage for those aged over 23 which comes into effect from March of 2022. The charm of the pandemic-induced ‘Magic Money Tree’ – where governments issue bonds that are bought by their own central banks – has been and gone. In its place, higher costs and higher wages must be funded from somewhere which means that investors will need to re-calibrate their current view of the world.

As the chart shows, almost 90% of UK manufacturers now expect to see price rises in the very near future as a result of today’s rising raw material costs. The last time that manufacturers’ prognostications were this dire was at the height of the global financial crisis in 2008. 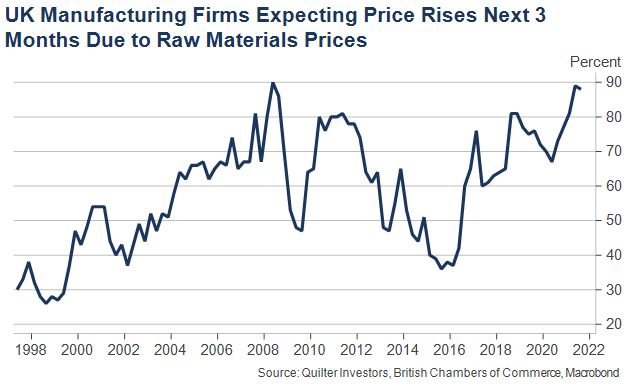 Even so, the question remains, will the US Federal Reserve add some new ingredients to the pot to make its charm firm and good, abandon the broth completely or simply carry on regardless?

In our view, the potion has been too much of a good thing, overstimulating demand and bringing forward pressures in the labour market that, all else being equal, would not have needed to be dealt with for another five to 10 years.

Their choices from here and how the economic climate evolves will continue to have profound consequences for financial markets. It’s a timely reminder to position for a variety of outcomes rather than just one and to remain diversified across asset classes, regions, styles and strategies.

There are three diverging schools of thought as to where inflation is headed and three key supply-chain shortages that are influencing the price of virtually everything on Earth.