As Paul Craig explains, there are three diverging schools of thought as to where inflation is headed and three key supply-chain shortages that are influencing the price of virtually everything on Earth.

The debate currently raging most furiously between market commentators is which label to ascribe to today’s high levels of inflation. The top three contenders are: transitory, persistent or stagflation.

The US Federal Reserve (Fed) is leading ‘Team Transitory’. Their MVP, Jay Powell, is a champion explainer of how annual US inflation, currently at over 4%, will soon return to the central bank’s average 2% long-term target.

If Donald Trump were still president, he might have ‘solved’ the inflation dilemma by simply raising the Fed’s target. However, the Fed has achieved much the same by more stealthy means thanks to its shift to flexible inflation targeting, which allows for some ‘catch-up’ for past shortfalls in price levels.

Meanwhile, companies are reporting more persistent inflation problems while the Bank of England is sending messages of concern and now stands ready to hit the monetary ‘brake pedal’ in response to stubborn and higher-than-forecast inflation pressures. Let’s call the home team ‘Team Persistent’.

Other economists and investment strategists, albeit a minority, are highlighting the surge in prices as the precursor to a consumer confidence crisis brought on by inflation exceeding economic and wage growth rates. Let’s call this camp ‘Team Stagflation’.

To discuss how best to choose a side, we caught up with Chris Taylor, manager of the Liontrust Japan Opportunities Fund. Importantly, Chris bases his views on industry data rather than econometric models, so they provide compelling, real-time, insight relative to the latest forecasting models (we also owe Chris for coining the title of our blog!).

According to Chris, many of today’s inflationary pressures are structural industry issues that, having taken over 20 years to ferment, will not be easily offset. This has already triggered a chain reaction which has created numerous, self-reinforcing, ‘feedback loops’ in certain supply chains. Specifically, the supply chains that relate to ships and chips.

Companies are reporting more persistent inflation problems while the Bank of England is sending messages of concern.

Because of their structural shortage, ships raise the price of virtually everything, which ultimately sets off higher wage demands (where we already have a problem with specific categories of low/no skilled labour). This then feeds back into costs again – hence the feedback loop.

There’s also the problem of lagging and leading in business stocking and replenishing cycles. For example, many retailers will have secured inventory, but not necessarily paid their logistical costs; these will need to be passed on or absorbed through lower profitability.

The combination of the two will deliver a hammer blow for prices. Inventory ordered now will probably be twice the previous cost, which will hit shop prices in the first half of next year. In the meantime, both Federal Express and DHL are upping their charges by close to 6% next year.

Elsewhere, the container shipping shortage is pushing up dry bulk and tanker rates. As the chart (below) shows, this year has seen more than a 200% rise in the cost of moving raw materials by sea.

While new-build container ships are forecast to see an 8.3% bump in global fleet capacity by 2023 it may not help as much as expected as these are mostly the mega 25,000 container vessels, which swamp many ports including some of the world’s busiest, such as Los Angeles. 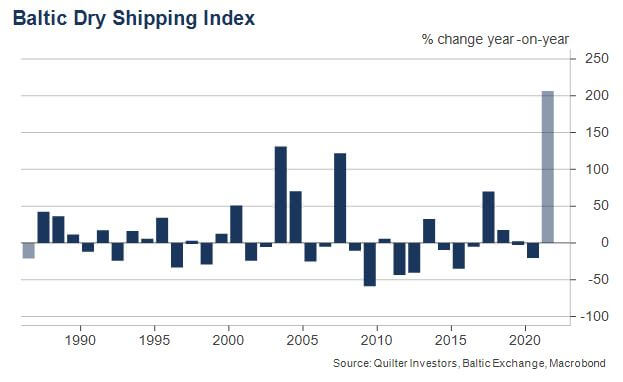 Out of the frying pan?

It’s much the same story in the chips (semiconductor) sector.

As Chris highlighted, SUMCO, which is held in his fund, announced capex to cover the increased production of silicon billets, which are currently sold out to 2026. While this ties in with global semiconductor sector capital expenditure (capex) of around $400bn – which will almost double production worldwide – this is still at least three years away.

The next problem in the sector is the clear mismatch between current chip usage and where the sector’s investments are going. While capex is focused on new hi-tech processors, today’s crippling shortage is in the less ambitious ‘old tech’ chips that make the microcontrollers in all our electrical goods, cars and machine tools.

The price of these individual chips is barely 10 cents each currently, but it’s no exaggeration to say that our very way of life relies upon them. Consequently, prices can only go in one direction from here.

The elephant in the room

Despite all this, it’s actually commodity markets that are probably doing most to push inflation higher as the price of energy, metals and agricultural commodities have all surged this year.

To put this into context, in the depths of the pandemic in April of 2020, buyers were being paid to take delivery of West Texas Intermediate (WTI) crude; today the price has climbed past $80 a barrel to hit multi-year highs. This has contributed to the 50% increase in the cost of the basket of commodities tracked by the S&P GCSO Commodity Index this year.

This all makes for inflation of 3% or more in the coming two to three years, which is long enough to see several interest-rate rises. As always in any inflationary scenario, the deciding factor will be wage growth – if inflationary pressures push wage growth too high it will effectively ‘turbo-charge’ inflation.

It’s actually commodity markets that are probably doing most to push inflation higher as the price of energy, metals and agricultural commodities have all surged this year.

The only two deflationary themes of note are the fact that unions hold far less sway today than in previous high-inflation decades and that lockdown has given a once in a generation boost to industrial automation firms.

Back in the 1970s, our powerful unions brought everyday life to a grinding halt by striking for, and receiving, ‘inflation +’ wage deals. This created another sustained feedback loop which ensured inflation endured. The position is quite different today thanks to the wholescale change in the UK’s industrial landscape (which was accelerated by our virulent unions of yesteryear) and the huge gains by (less militant) service industries in the proceeding decades.

A good example is the news that Amazon warehouse workers in New York are hoping to hold a vote to unionise in the latest minor labour dispute to ruffle the global giant.

Meanwhile, lockdown has left many employers bereft of staff and dusting off their plans to automate large parts of their production and supply lines. Industry estimates put the global value of the “human physical and knowledge work” that stands to be replaced by automation at $14.7trn while the systems giant CISCO estimates that some 54m production machines around the world are still to be connected to one another.

The production gains delivered by automation have been a major deflationary force in recent decades and are set to be so again.

While the inflation pressures released by lockdown are beginning to ebb, it may come to rest at a higher level that central banks and consumers have been used to. However, the brutal reality is that governments everywhere are relying on inflation to deflate away some of their lockdown debt burdens.

After two decades of strong deflationary tailwinds, the adjustment process that financial markets must undergo is bound to create volatility and rotation across and within asset classes.

For now, how the Fed, companies and consumers react to rising prices will determine which of today’s competing schools of thought proves to be the winning team when it comes to predicting the course of inflation over the coming years.

Hinesh Patel explains it will take some real magic to extricate western economies from the problems created by central banks...