February was a month of two parts. The first, saw a continuation of January’s mounting inflationary pressures causing investors to expect more urgent US interest-rate increases. This made life hard for both bond and equity markets.

However, markets recoiled in the second part of the month following Russia’s 24 February invasion of Ukraine. The price of oil, gas, industrial metals and other key commodities began to spiral forcing markets to fret over the likely consequences for inflation and the prospect of a prolonged energy crisis in Europe.

Economic sanctions imposed by the West on Russia included freezing the central bank’s currency reserves and excluding a number of Russian banks from the SWIFT messaging system used for international payments. By the month’s end, Russia’s rouble had tumbled over 20%, its stock market had ceased trading and the price of Brent crude oil had broken $100 per barrel. 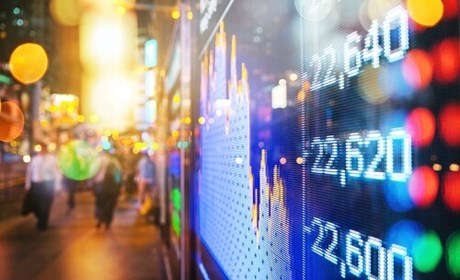 The portfolios delivered losses in February.

Amid this, UK equities held up well, buoyed by the market’s heavy weighting to energy and materials stocks. The FTSE 100 Index ended February up 0.3% to be the only regional market in positive territory. Even so, the FTSE 250 Index of smaller companies declined 3.7% contributing to a loss of 0.5% for the FTSE All-Share Index.

In the US, economic growth remained robust but annual inflation, as measured by the Consumer Price Index (CPI), hit a 40-year high of 7.5% in January. With the exception of energy stocks, the US equity market suffered losses with tech companies the most notable casualty. As a result, the MSCI USA Index declined 2.9% in February.

As Europe relies on Russia for its gas, sanctions against Russia have so far avoided energy markets. Even so, Europe is the region most economically exposed to Russia and the war taking place at its borders, which has already resulted in European promises to greatly increase defence spending. Consequently, European equity markets fared worst in February with the MSCI Europe ex UK Index down 3.9%.

Emerging market equities weren’t far behind. Despite only having a small weighting to Russian assets, the MSCI Emerging Markets Index ended the month 3% lower.

In the UK, the Bank of England raised interest rates at the start of February, as expected. They moved from 0.25% to 0.5% although four of the bank’s nine Monetary Policy Committee members voted for a larger hike of 0.5%. Consequently, the ICE BofA Gilt Index was down 1.5% in February as government bond yields rose in line with UK interest rates (meaning their prices fell).

Although government bond yields rose in the opening weeks of February, the direction of travel reversed following Russia’s invasion as investors sought ‘safe-haven assets’ (such as government bonds and gold). As a result, the BofA US Treasury Index (sterling hedged) ended the month down only 0.7%.

(All performance figures in sterling terms and rounded to one decimal point, unless otherwise stated.)

Note: Currency hedging of foreign investments dampens the effect of currency fluctuations on returns and reduces the volatility of your investment. Under most circumstances, we currency hedge foreign currency bond holdings, except in cases where the foreign currency exposure is an explicit return-driver (eg emerging market local debt exposures).

With equity and bond markets retreating, the majority of the Cirilium Portfolios delivered losses of just under 2% while the Cirilium Dynamic Portfolio declined 2.2%. This underlined the disappointing performance of the portfolios in February in what has already been a challenging year for the Cirilium range in terms of relative performance.

The higher-risk portfolios marginally lagged their peers due to their limited exposure to Russia, the sharper sell-off seen in ‘quality growth’ stocks than in ‘value’ stocks and their relatively high exposure to smaller companies, which suffered more than their larger counterparts.

Those equity managers exposed to quality growth stocks and smaller companies generally suffered most while our listed private equity holdings also succumbed to the sudden reduction in investor risk appetite.

An investment trust of Russian property assets was the biggest casualty.

Meanwhile, the lower-risk portfolios benefited from holding higher levels of cash and cash alternatives although this was mostly offset by the losses arising from our holding in the Raven Property Group, a London-listed investment trust of Russian logistics assets.

In early March, we subsequently made the decision to write this holding down to a price that is effectively zero. We’re now in discussions with the manager regarding our options for divestment, while taking into account the best interests of our clients and their expectation of Quilter Investors as a responsible manager.

Our fixed-income holdings also generally declined, impacting lower-risk portfolios in particular, due to their higher weightings. The most notable casualties were those with higher corporate bond (issued by companies) and emerging market debt exposures such as the Wellington Opportunistic Fixed Income and the Hermes Unconstrained Credit funds.

Alternative income exposures such as the Fair Oaks Income and the Brooks Ground Rent Income funds fared better while some of our alternative diversifiers such as the Tages Eckhardt Systematic Short Term and the Cooper Creek North America Long Short funds provided positive returns.

In the absence of clarity around geopolitical events, and little change in the underlying fundamentals, changes were subdued during the period albeit we remain nimble, ready to respond to any significant changes in the investment landscape.

The majority of our limited trades took place prior to the Ukraine invasion and included marginally increasing our US exposure at the expense of our UK and emerging market holdings. Elsewhere, we trimmed our holding in Berkshire Hathaway following strong performance and reduced some of our more value-oriented holdings such as Investec Global Special Situations, Polar Capital UK Value, Usonian Japan Value (GMO), Pacific North of South Emerging Markets, Allspring Emerging Market Equity Income and the Quilter Investors Equity 2 Fund, managed by Investec.

In the lower risk portfolios, the proceeds from this were added to our absolute-return fund holdings while elsewhere we added to large company ‘quality growth’ holdings such as the SGA US Large Cap Growth and Martin Currie European Unconstrained funds.

In the fixed income portfolio, we moved some cash into short-term assets to benefit from the rising yields on offer as interest rates increase. In the Cirilium Dynamic Portfolio we also bought shares in the French-listed private equity investor, Eurazeo.

The most immediate impact of the Ukraine conflict on developed markets is via spiralling food and energy prices. These will underpin inflationary pressures, eating into household incomes. Meanwhile, conflict, embargos and sanctions all have the potential to further disrupt supply chains.

With so much near-term uncertainty, we believe there is a stronger case for diversification, active management and patience rather than trying to speculate on the most appropriate short-term theme or binary outcome.

For example, ‘value’ stocks outperformed in February and are expected to continue to attract investors amid rising bond yields (meaning bond prices are falling). However, whether ‘value’ continues to outperform as a style of investment depends on the underlying companies themselves and there are a host of concerns for them, including rising energy and wage costs and slowing economic growth.

The latest geopolitical developments are increasing the probability of an economic slowdown and slowing company earnings growth. In our opinion, this favours ‘quality’ and ‘growth’ stocks over ‘value’. That said, not all growth companies will deliver the exceptional returns that investors have come to expect. Many have benefited from the ultra-low interest rates of recent times while others enjoyed a once-in-a-lifetime boost from the pandemic.